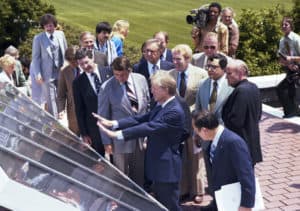 Back in October, Jimmy Carter leased 10 acres of land to provide solar power to his hometown of Plains, Georgia. Earlier this month, Carter unveiled 3,852 photovoltaic solar panels that are estimated to produce more than 50% of the power the small town consumes regularly.

Solar power has come full circle for our former president. He saw the potential the solar industry could have on the country and we don’t think he will have to worry about anyone tearing it down. Some of Carter’s solar hot water panels are still around today. One can be found at the Smithsonian, another at the Carter Library in Atlanta, Georgia. Source: https://nyti.ms/2m5AWv9

What is your average electric bill?